There’s no one way to grow an email list—across businesses and within them, too. From must-dos like adding opt-in forms across your website to more advanced strategies like offering downloadable content and webinars, many small businesses, with help from Keap, use a variety of tactics that they change and optimize as the list grows.

We asked 5 small businesses with list sizes varying from 1,000 to 25,000 which strategies have proven most effective for their unique businesses and audiences.

Jason Brown paid a whopping $4,000 for a stock investing course that was over his head. Once he learned the stock market on his own, he wondered, “Why didn’t they explain it the way I needed to hear it?”

To help other beginner investors, he uploaded a free, low-quality recording of him speaking at a seminar to the online course platform Udemy. When viewers kept asking if he sold courses, Brown realized people were willing to pay for his advice.

The Brown Report, the online stock market education website he launched in 2013, earned $500,000 in revenue last year. While Brown’s email list has grown to 25,000 subscribers, the core of his strategy hasn’t changed since he created the Udemy video: He gives away good advice for free.

Brown captures 50 to 60 leads daily through free, automated webinars, which he advertises on YouTube and Facebook. Using Infusionsoft by Keap, Brown then sends attendees a series of automated follow-up emails based on how much of the webinar they watched. Someone who left halfway through needs more education, while someone who stayed until the end is ready for offers about Brown’s paid courses.

But during the webinar, Brown doesn’t focus on making an offer, only about sharing what he learned as a beginner stock trader. That’s why, he thinks, the webinars produce so many leads—and ultimately sales.

“I say, here’s what you’re going to learn. You’re going to be more educated than you are now. It’s nothing about money,” Brown said. “I think people say, you know what? That seems like a genuine offer.” 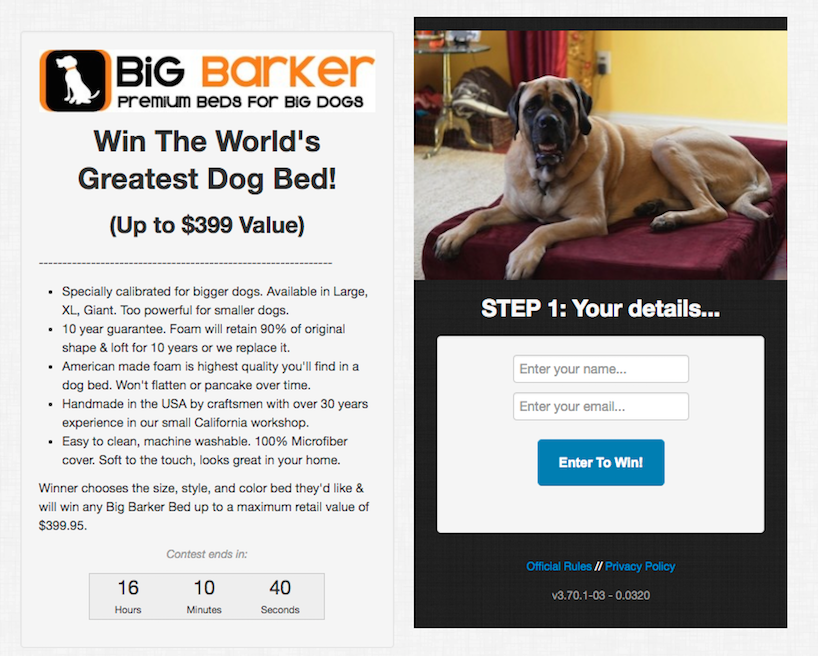 If you’re giving away free stuff, it’s pretty easy to collect leads. Actually converting them into customers is the hard part.

That’s what Big Barker learned when the company, which makes orthopedic beds for large dogs, launched in 2013. To grow its email list, the company sponsored giveaways for Petco gift cards on Facebook, targeting the followers of other pet companies.

The giveaways attracted plenty of leads—who proceeded not to open subsequent emails, let alone buy dog beds. Apparently, entrants just wanted to score a free Petco gift card if they could get one. The Big Barker team can’t recall, but it’s possible the giveaway produced not a single sale.

“We learned that if you're going to do a giveaway, you better make sure that it's relevant to the offer that you're going to make in the end,” said founder and CEO Eric Shannon.

Now, Big Barker gives away its actual product—a dog bed valued at up to $399.95—through a series of 10-day contests continually advertised on Facebook. Instead of hoping entrants buy at the end of the contest, Big Barker sends a series of automated emails explaining the company’s origin story and how the bed helps protect the dog’s joints. Ultimately, the entrant receives an offer to finance the purchase.

Thanks largely to the giveaways, Big Barker now has an email list of 23,000 subscribers. About 1 percent of giveaway entrants purchase the dog bed upon the contest offer—with the company seeing more conversions over time as non-customers are added to its email newsletter. 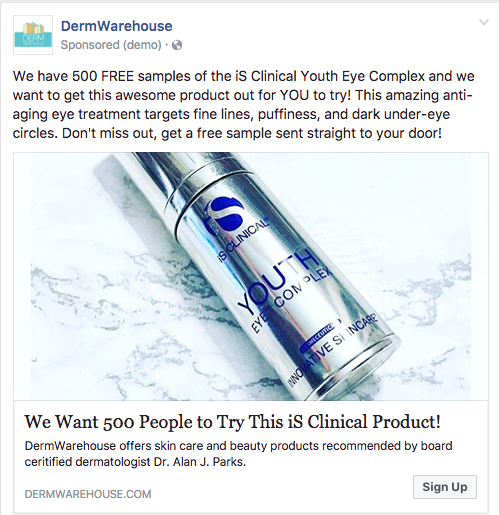 Although Dr. Alan J. Parks started his dermatology practice more than 30 years ago, he’s also a startup founder with a brand-new email list. In early 2017, Parks and his daughter, Stefanie Parks, launched a skincare and beauty e-commerce site, DermWarehouse.

To gain its first email subscribers, DermWarehouse turned to Facebook Lead Ads. This type of Facebook ad uses a lead-capture form pre-populated with the email address the user has already shared with Facebook, making sign-ups easier and faster, especially on mobile devices. Facebook leads can then automatically be imported to a marketing automation system like Infusionsoft by Keap for follow-up.

By offering a free product sample through a Facebook Lead Ad, DermWarehouse captured more than 500 email addresses at a cost of 57 cents each. Eleven of those leads then purchased products, covering the cost of the advertising campaign.

DermWarehouse captures additional email addresses on its website with a 10 percent off promo code for new subscribers—an offer that appeals to a prospect who, in a later stage of the sales funnel, is already looking at products.

“On Facebook, you’re getting them earlier in the funnel,” Stefanie Parks said. “They likely have no desire to buy an iS clinical product, but once they were exposed to our ad campaign where they could get a free sample, their mindset changes.” 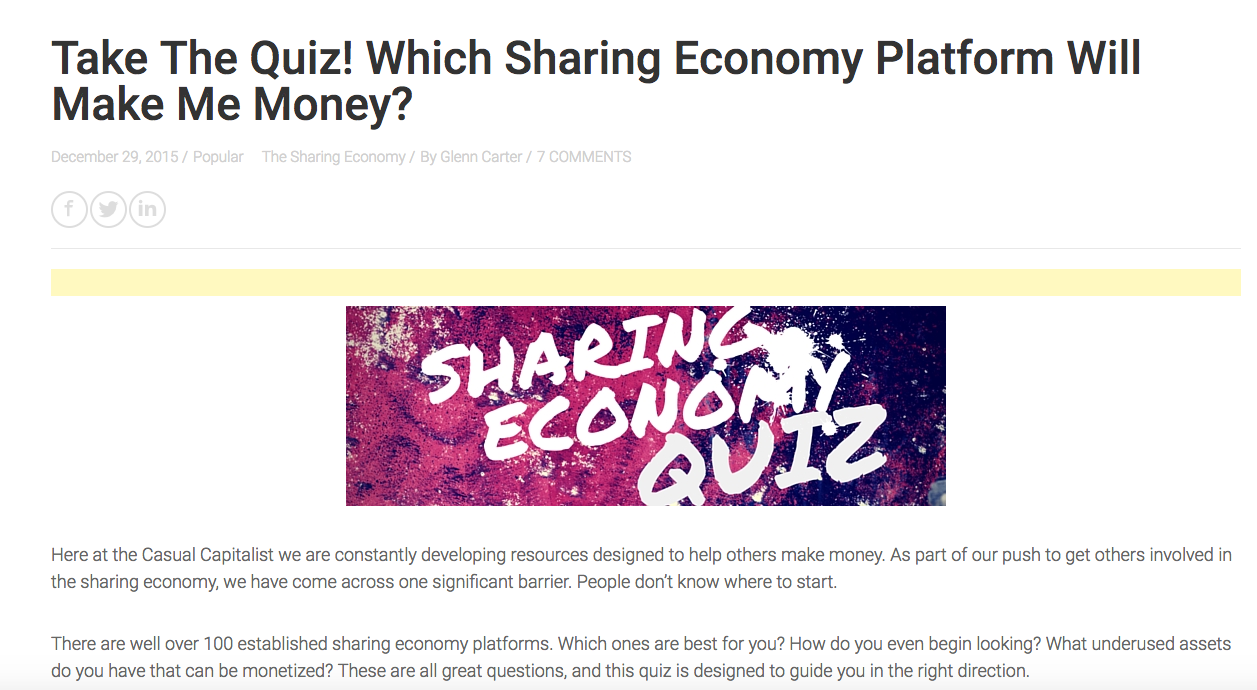 In a world with Uber, Lyft, Airbnb, Postmates, Doordash, and countless other sites offering people-for-hire, what’s the best way to earn a little extra cash these days?

The Casual Capitalist asks exactly that through a quiz, “Which sharing economy platform will make me money?” Quiz-takers discover their personalized recommendation by answering questions about their personality, possessions, skills, and the amount of supplemental income they’re seeking.

While aspiring Airbnb hosts and Uber drivers get advice, Casual Capitalist founder Glenn Carter gets email addresses he uses to send automated follow-up emails and drive more traffic to his website, where he earns revenue from advertising and affiliates. Of his 3,000-person email list, 65 percent originally opted in from the quiz. 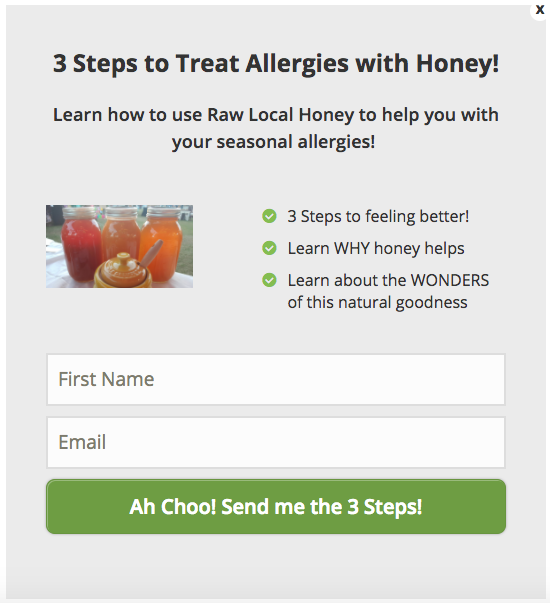 At first, the H&H Honey website featured what co-founder Clay Harper jokes is the “worst kind of email capture you could possibly do.” The website, which sells raw honey, simply asked visitors to subscribe for updates.

Over time, though, submissions to the website’s “contact us” form inspired Harper to create another way to capture leads: a downloadable guide about using honey to treat seasonal allergies.

“People would submit the form and say, ‘How do I use this for allergies?’” he said. “It was the most frequently asked question. We just listened to the questions people already have and supplied an answer.”

The guide explains how raw honey, which is infused with pollen from plants visited by bees, can help the body adjust to seasonal pollens in the air. Appearing in a pop-up on the website, the guide has helped H&H Honey grow its email list to 1,200 subscribers. Those who download the guide receive subsequent automated emails encouraging them to buy honey, with about 15 percent taking H&H Honey up on its offers.

The three-page PDF, which Harper designed in the free design tool Canva, isn’t complex. But rather than waiting to perfect the guide before publishing, Harper is glad he launched the guide and plans to improve it over time.

How to Create and Market a Lead Magnet: The Ultimate Guide

“It’s basically a glorified Word document. It’s not even pretty; I’m not proud of it,” he said. “But it works.”