What is a chatbot?

“A chatbot is a software application that can complete tasks in an automated way without needing humans,” said Cliff Worley, co-founder of Bitbot.ai, a third-party chatbot builder for Facebook Messenger.

In my exploration to understand where chatbots came from, what the allure is, and how businesses can use/are using them today, I sat down with Worley to get his expert opinion and insight.

The chatbot market is experiencing rapid growth—Grand View Research predicts the market will reach $1.23 billion by 2025 with a compounded annual growth rate (CAGR) of 24.3 percent. Additionally, 80 percent of businesses said they already use chatbots or plan to deploy them by 2020, and 45 percent of end-users prefer chatbots over humans for basic customer service needs.

Before we get too far into how chatbots are used for business today, let’s take a quick trip through history to understand how chatbots as we know them today came about.

How AI is Helping Small Businesses Beat their Competition

The earliest chatbot of note was ELIZA. Created in 1966, ELIZA was built to simulate a psychotherapist through text-matching capabilities. Her responses were so good that she passed the Turing test, and users even confided their most profound thoughts to her. In 1972 she was superseded by a chatbot named PARRY, which was designed to mimic a patient with schizophrenia (the two even "met" a few times). 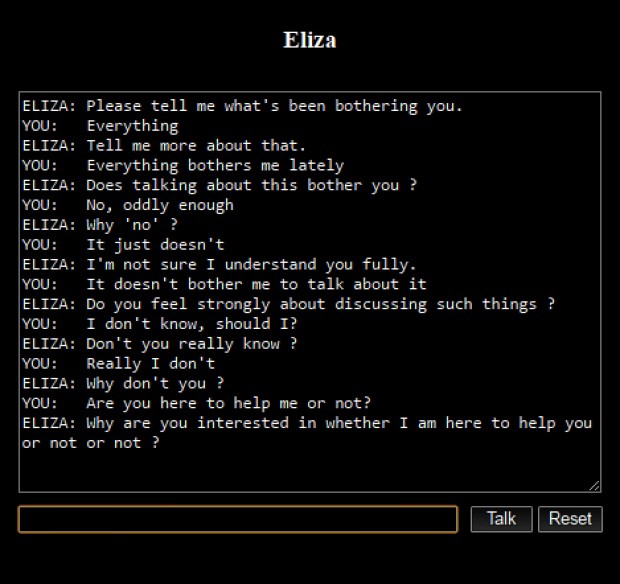 Following ELIZA and PARRY came a handful of other predecessors to the chatbots we recognize today, but the next chatbot to make a serious impact on normalizing the technology was SmarterChild. Any millennial who spent hours on AOL Instant Messenger as a kid remembers conversing with this chatbot, but it’s likely not many knew of its impact. In fact, SmarterChild is known as the precursor to the voice assistants we know today (Siri, Alexa, Cortana, etc.). 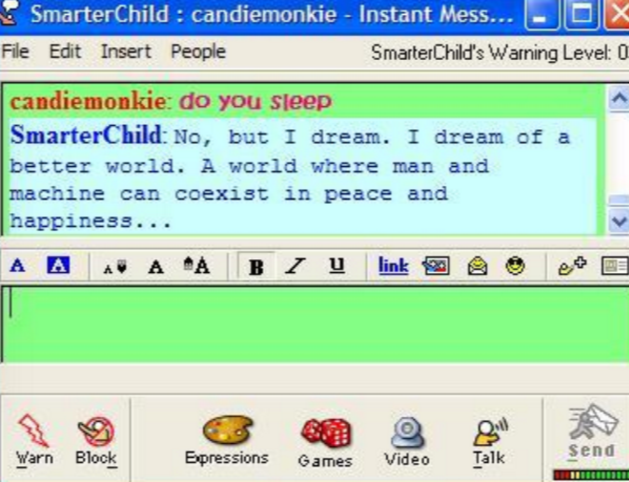 Finally, we’d be remiss if we didn’t mention IBM’s Watson. Although initially developed to answer questions on Jeopardy!, Watson has integrated with businesses in every industry around the world and provides its intelligence to everything from e-commerce and customer service, to behavior learning for car owners.

Today, tech giants like Apple, Google, Amazon, and Microsoft all have their own version of A.I.-powered bots or assistants, but it was Facebook who really made access to chatbots easier than ever for business owners.

In April 2016, Facebook announced it would allow businesses with a Facebook brand page to host chatbots on its Messenger platform. This opened a new channel for customer support, e-commerce guidance, content, and interactive experiences. It also opened the door for businesses to its 1.3 million users. Today, there are more than 200,000 chatbots on Messenger. Messenger bots can also accept payments natively (meaning without sending the customer to an external website).

With this kind of reach, Worley was definitely on to something. When he and his business partner, Sir Drafton, learned Facebook was allowing businesses to host chatbots on Messenger, they decided to scrap their prior business endeavor of building Twitter bots.

“We thought, ‘Oh, let’s drop this product and put everything behind the Facebook chatbots,’” Worley said.

Facebook Messenger, he explains, is a bit like email in the early 90s: Messenger inboxes are still a fairly untapped channel of communication, and there’s still enough novelty to it that people look forward to the messages they receive. Because of this, open rates are extremely high (80-90 percent). It’s also worth mentioning that Messenger lets businesses “enjoy fewer competitors, less ad fatigue, and potentially exponential returns on the marketing investment.”

Worley and Drafton saw an immediate need for a third-party system with Facebook’s chatbots. Facebook offered the application programming interface (API) to allow businesses to set up a send-and-receive program, but businesses needed to build their own chatbots in order to take advantage of the program.

Bitbot.ai is a third-party platform that lets marketers of all experience levels build their own chatbot in minutes by choosing from pre-made templates, interactive add-ons, like quizzes, polls, contests and giveaways, and event guides. Users can also integrate their preferred business apps (like their CRM platform or e-payment service).

Chatbots for the rest of us

The integration feature of third-party chatbot programs like Bitbot.ai are extremely valuable for businesses. Worley explains how this works with Keap:

“We have this one-click integration to Keap. You literally go in, sign in to your Keap account, connect your account, then we can basically make sure that you can turn on lead capture to any message.” This function then tells the chatbot that before they see a certain message, the chatbot must capture their email. The integration then pushes that information to Keap (or any other integrated CRM service).

While this type of service may sound like a big investment, most are actually pretty inexpensive—the maximum subscription costs range between $50 and $100 a month.

You can also opt for a free chatbot developer service (and there are many out there), but what you don’t pay for you make up in time investment.

“When you see something is free, it’s usually just the basic features,” Worley said. “So you’re not going to get anything like the CRM integration or polls, content, quizzes.” While some of these services may provide you with a chatbot that greets people or provides automatic responses, you’ll still have to manually transfer all that contact and interaction data to your business apps, or you’ll have to pay for an an additional third-party service that does it for you.

So, how can I create a chatbot of my own?

Before you start designing your own chatbot, decide where you want to host it: natively, on your website, or on a hosted platform, like Facebook Messenger. Each have their pros and cons, but Worley’s drawn to Messenger because it’s an easier way to reach potential customers who are already using the app. With a native chatbot, prospects have to find your website before they can interact with it.

Next, Chatbots Magazine recommends creating a mockup of what you want your chatbot to look like, both in design and in dialogue. This can help work through any initial bugs that might occur, and provide a visual explanation to additional stakeholders.

Botsociety.io has a tool that lets users create a mockup chatbot by entering the general questions customers and visitors might ask, and the desired answers from the chatbot.

Now you’re ready to build your chatbot. Tools like Dialogflow and Flow XO make creating a chatbot as easy as building a flowchart. Botsify takes users through the entire building journey. It helps them design their chatbot, develop it (without needing to know how to code), launch it, and use it to grow their leads.

If you prefer to go the route of Facebook Messenger, the idea is still the same. You’ll still want to create a mockup, work through potential bugs, decide what the general script should be for your chatbot, and set up your preferred integrations.

Bitbot.ai simplifies this process with its drag-and-drop feature for a super quick turnaround, one-click CRM integration, and lets users include interactive modules, like quizzes and polls, sweepstakes and contests, and event guides. Users can even run Facebook ads to your chatbot. 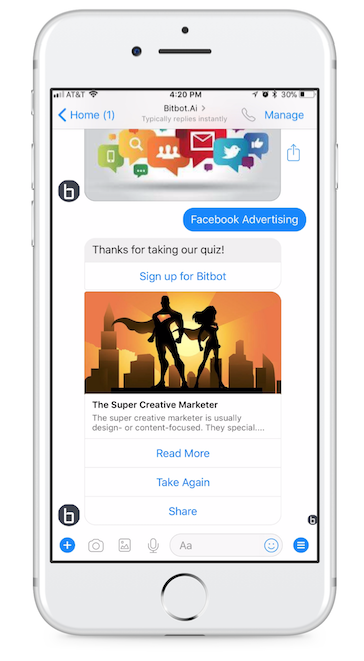 “My biggest advice is, the earlier you get in there, the better,” Cliff says. “Imagine if in 1990 you knew that email was going to be where it’s at today, and open rates were at 80-90 percent. You’d have been really successful at that time to be an early adopter.”

Some additional and helpful articles on chatbots:

A report from Infusionsoft and Emergent Research